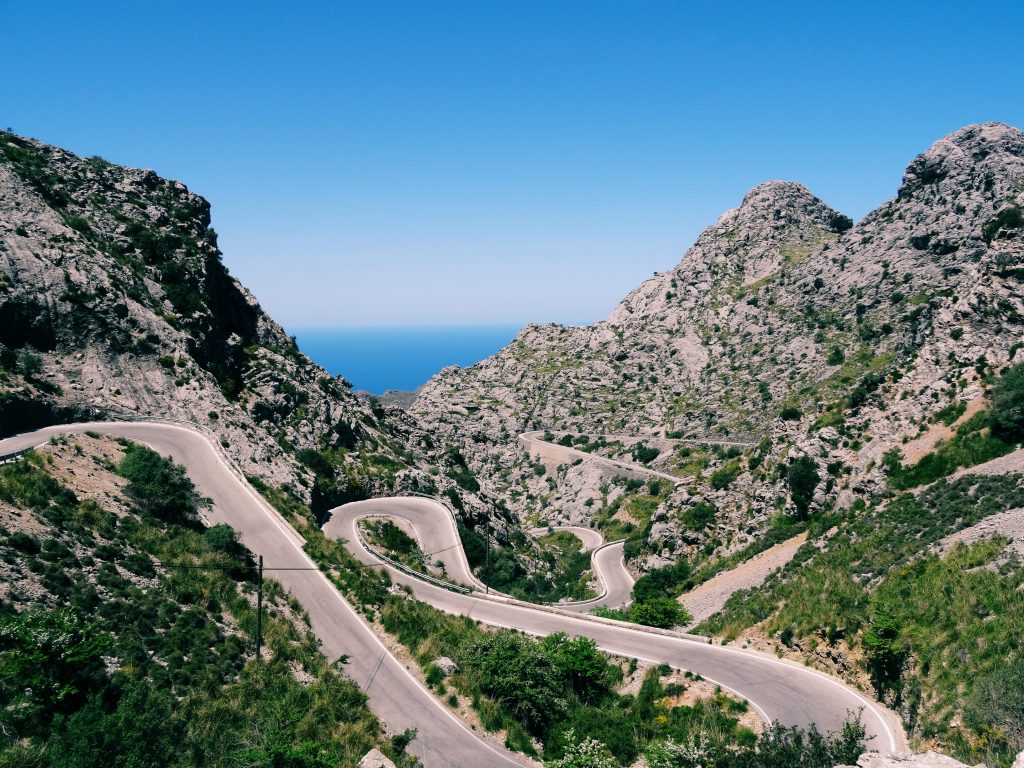 Five children, Mom, Dad and enough luggage for a week of camping were stuffed into the little vehicle. It was a long climb with hair pin turns, a narrow mountain road with sheer cliffs. As we continued to climb in our little red mini-van, I quieted the excited children, tightened my seat belt, and gripped the arm rest until my knuckles were bone white.

Looking down upon the road we’d just traveled, the tiny vehicles just beginning the climb looked like matchbox cars. We were only half way. I saw the expressions–intent concentration, fear, and smelled the brakes of those we drove past as they came down the narrow curves. I began to fret over the descent that was inevitable. Would our brakes hold up? Would our heavy load be too much for our little four cylinder vehicle? That’s not our transmission I smell, is it?

There was no turning back. We were committed by now, so we followed the trail of exhaust fumes and burning brakes as others cautiously wound up through the thinning air above the timberline.

Just as we reached the top, the road disappeared behind a bend. We reached the high point – the elevation was over 10,000 ft. I was sure this was it!  Straight down! That awesome ascent would turn into a dreadful, plunging descent.

The road continued around a knoll, green, beautiful meadows, lovely lakes nestled in the dimpled rolling hills, snow-covered mountain peaks in the near distance not much higher than we were. We reached a high plain, a plateau. The entrance to Yellowstone Park was ahead, but surely the road the road would plunge several thousand feet!

Donnie and the kids jumped out of the car and ran down the gentle hill to a quiet lake. As they played in the meadow I stayed by the van with the baby marveling that God had brought us to this beautiful safe place. Donnie drove with extreme concentration, I prayed (a lot), and the kids trusted us and enjoyed the view.

I’m not sure how we ever got back home. We didn’t go back the way we came. It never seemed like we went down as far as we went up. I really don’t know that we ever left that place.  It felt like home, like the rolling hills where I grew up, and the memory of that safe place on that high plateau was engraved in my memory. It was exhilarating. We had won the battle. We traveled the road and had arrived.

God wants to bring us to a place in our walk with Him, but there is an enemy. 1 Peter 5:8 says “Be alert and of sober mind. Your enemy the devil prowls around like a roaring lion seeking whom he may devour.” The battle is real. God has a place for us, but there is an enemy that is out to destroy us and all other works of God. We fight the battle and break the curses so our children can live in freedom. We fast and pray for a region and bind the principalities and powers of the air so our neighbors and friends will see truth and recognize the God of the Universe sent His Son to die so they can have everlasting life.

In our carnal selves, we can’t win a battle against such a crafty, wicked enemy. Adam and Eve were deceived, and throughout scripture we see how people have turned their hearts from God, even after witnessing great miracles and deliverance (consider Moses and the children of Israel – the plagues and the parting of the red sea, and Mount Sinai and everything God did, and yet they wandered in the wilderness for 40 years because they murmured and complained, they did not put their trust in God or the leaders He gave them)

God gives us everything we need to survive this battle.  “Put on the whole armor of God, that you may be able to stand against the wiles of the devil. For we wrestle not against flesh and blood, but against principalities, against powers, against the rules of the darkness of this world, against spiritual wickedness in high places. Wherefore take unto you the whole armor of God, that ye may be able to withstand the evil day, and having done all, to stand.”

All that God has for us is found in our time spent with Him. God prepares us as we go to a higher level in our spiritual journey. But it is for us to “Put on the whole armor of God . . . Stand therefore, having your loins girded with truth, and having on the breastplate of righteousness; and your feet shod with the preparation of the gospel of peace; Above all, taking the shield of faith, wherewith ye shall be able to quench all the fiery darts of the wicked. And take the helmet of salvation, and the sword of the Spirit, which is the word of God: Praying always with all prayer and supplication in the Spirit, and watching thereunto with all perseverance and supplication for all saints; Ephesians 6:11, 14-18.

Just like that journey through Beartooth Pass, we have a journey to go to the next phase. God has an important mission just for you. It’s something that you were specially chosen to do. It’s an upward call, it might stretch you and be uncomfortable to you, but when you get to the place God wants you, you will marvel that you ever doubted the journey.

Kathy Rice has lived in Pennsylvania since marrying her husband in 1977. She was born and raised in Montana, and attended Montana State University and YWAM’s School of Evangelism in Bozeman. She met her husband on a wagon train that went across the United States in 1976 during the bicentennial with Youth With A Mission. She attended Christ for the Nations in Dallas, Texas, and worked in Haiti among the impoverished nationals where her first child was born. Her six grown children currently live in central Pennsylvania, and she enjoys time with her thirteen grandchildren. Kathy has authored a book, Kathy Run, telling of her young life on a farm in northeast Montana while attending a one-room school. She is currently a Realtor® with Re/Max of Lebanon County. Many of her inspirational pieces are drawn from her experiences on the farm, on the mission field, and raising her family next to her husband, Donnie Rice.
← Mess Up Time Night Watch - Trusting God in the Darkness →