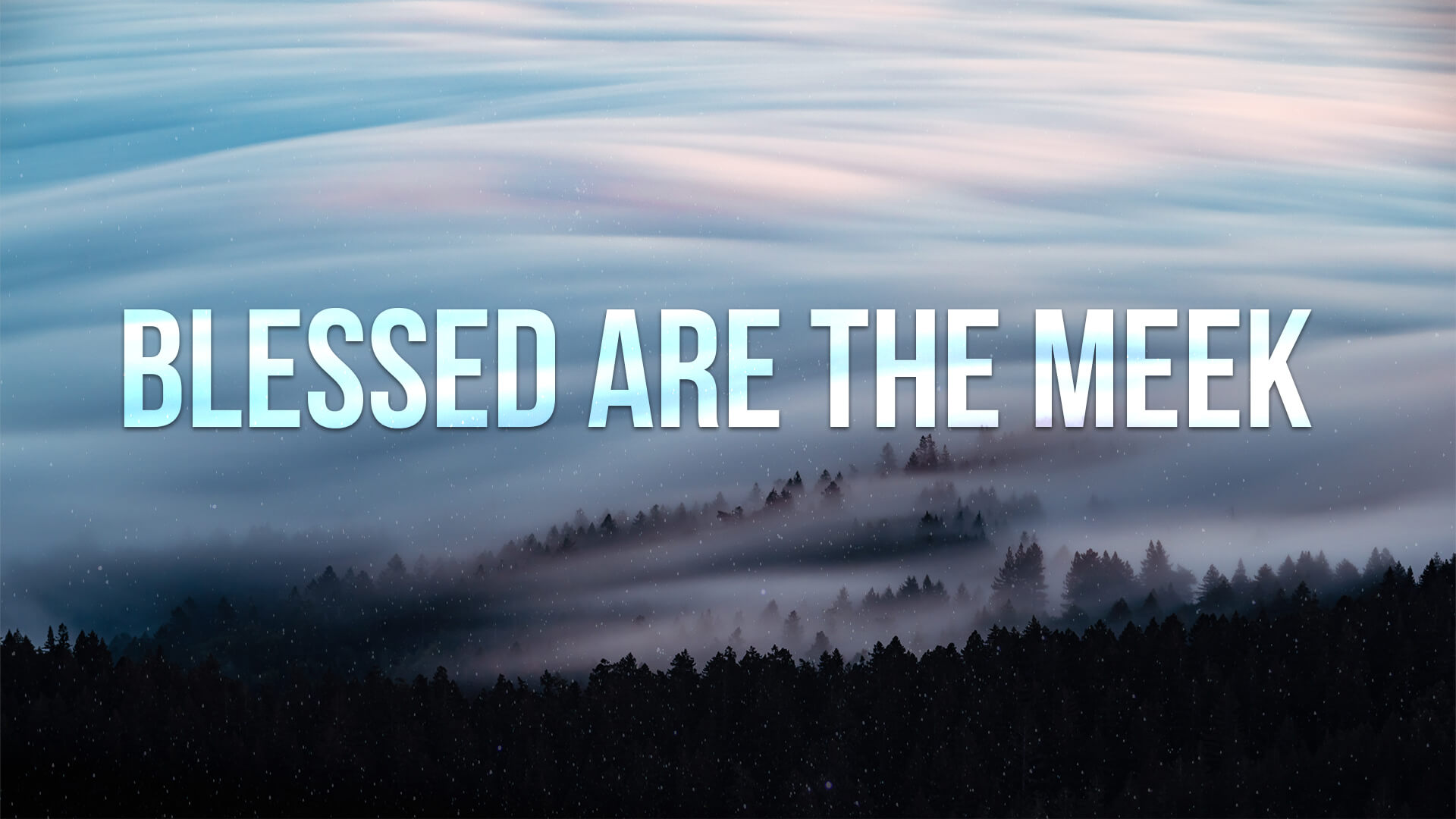 Blessed Are the Meek

What do all of these events have in common? Barry Manilow’s record “Mandy” goes gold. Haldeman, Ehrlichman, and Mitchell are all convicted of crimes in the Watergate scandal. Superbowl IX took place as the Pittsburgh Steelers beat the Minnesota Vikings 16 to 6 in New Orleans. The Superbowl MVP was Franco Harris. “The Jeffersons,” a spinoff of “All in the Family,” premiered on CBS. The song, “Thank God I’m a Country Boy” by John Denver hit #1. What all of these events have in common is that they all occurred in the same year that I studied and committed to memory The Beatitudes. The year was 1975. Since that day the Beatitudes have guided my life and contributed to my character.

The virtues found in the Beatitudes (Matthew 5:1-12) are so important, and so missing and needed in our culture today! What Jesus was teaching us in the Sermon on the Mount is that his followers are to be a counter-culture people with distinctive goals, values, standards, and lifestyles that are in marked contrast to modern culture which sadly is marked by the bondage of materialism, self-centeredness, and greed. Christ’s call is a call to be different, non-conformist.

Do you believe that there should be something different about Christians in our culture? How we do family? How we function at work and in our careers? How we function as neighbors? What values we live for? How we handle money and material things? Jesus taught about the KINGDOM: God is King, we are His subjects, and His values need to become our values. God is calling us to be different – to be Plan A people in a Plan B world.

The message of The Beatitudes is simple: “Do you want to find happiness and blessedness in life? Then here are the things you need to embrace.” What Jesus taught is so contrary and counterintuitive compared to what the world says happiness is connected to, and one of the most countercultural values found in the Beatitudes is in Matthew 5:5, “Blessed are the meek, for they will inherit the earth.” Meekness sounds kind of cute and nice. But when was the last time you thought that meekness is a cherished value of our culture?

Like some of you, I have a profile on Linkedin, a business-oriented social media platform. A friend of mine recently “endorsed” me for having 7 skills. Guess what? Meekness did not even enter into the equation. No one lists “Meekness” as one of their qualities. No one puts that on their résumé. No employer says they’re looking for meekness. Usually, they say they are searching for self-starters; aggressive go-getters; ambitious people. But Jesus says that happiness is found in meekness! The meek will inherit the earth. So, we must first define it.

In the ancient world, meekness was a virtue as well as a quality to be valued and sought after. Unlike with the people of Bible times, today “meekness” does not seem to have a positive connotation. It is often associated with weakness rather than a symbol of strength. Meekness and weakness are synonymous in our minds. It describes someone who is compliant, spineless, and passive. We associate the term with a wimpy, non-achiever who is easily intimidated, dominated and frightened. A human mouse inflicted with a low sense of self-esteem and apathy. However, the Greek word used in this passage means this: “Meekness is power under control.” It has nothing to do with weakness. Meekness is controlled strength that is completely surrendered to God’s control.

The symbol of meekness in ancient times was a horse, a tamed horse. Whatever vehicle you drive, the strength and power of it is measured by HORSEPOWER. My TORO lawnmower has an engine with 6.5 horsepower. My Toyota Rav4’s engine has 179 horsepower. A horse is a symbol of power for us, too. In ancient days it was also a symbol of meekness, because now, the strength of the horse is in the hands of the one who holds the bridle. The horse can now accomplish great things. The horse can now channel its massive strength to do something constructive. To go great distances. To carry great burdens. Why? The power is under control.

A meek person is not a weak person. It is a person whose strength is under God’s control. Power without control is dangerous! Think about electricity. We power our homes with all its many appliances because of electrical energy under control. A lightning bolt is electricity, too. But it is very destructive because it is power out of control.

Meek people trust God to defend them. Meek people use their power to accomplish God’s agenda, not their own. Meekness is best understood in relationships. In their relationships with others, meek people are gentle. Sometimes the Greek word for meekness is translated as gentleness. Have you noticed the gentleness of Jesus in the Gospels? With the children? With the woman caught in the act of adultery? In our relationship with God, the meek person is humbly submissive.

There are only two people in the Bible who were actually called “meek”. While many Bible characters exhibited the qualities of meekness, only two were called meek: Moses and Jesus. MOSES: Numbers 12:3, “Moses was very meek, more than all people who were on the face of the earth.” JESUS: Matthew 11:29, “Take my yoke upon you. Let me teach you, because I am meek and gentle at heart, and you will find rest for your souls.”

HOW DO MEEK PEOPLE LIVE?

A good barometer to use to measure how much you are trusting God is to look at how much anxiety is in your life. The more anxiety there is – the less trust there is. By the way, prayer should never become worrying in God’s presence! We would all do well to heed Paul’s advice in Philippians 4:6, “Don’t worry about anything, pray about everything…” Meek people trust God.

2. The meek commit their way to God.

Commit in the language of the Bible means “to roll”. You roll it all on the Lord. Your life, your issues, your finances, your family, you roll it all on Him. You’re not in good hands with Allstate, you’re in good hands with Jesus. I Peter 5:7 encourages us to, “Roll all your cares on him…”  Meek people have learned how to roll things on the Lord, because they have given Him the reins; they became meek.

3. The meek quiet themselves in the presence God.

In His presence, the anxiety and tension go away. We begin to trust the sovereignty of God. We become convinced that “All things work together for good…” (Romans 8:28) As far as my God is concerned, all the chapters of my life are already written and known by Him. I am not supposed to be passive. He gives me things to do. But I am waiting on the Lord. This is rarely found in our culture. And sadly, it is seldom found in the church! Meek people rest in God’s presence.

4. The meek don’t stress out when the wicked prosper.

Sometimes, it’s easy to conclude, “God, I have been generous and faithful, and yet I am struggling. They however, are evil and selfish, and they seem to have everything they want and need.” But the meek person says, “I am not worrying about God’s agenda for those people. I am concentrating on His will and purpose for my life!” Please understand: The accounts of life have not yet been settled.

An old missionary couple served in Africa for 50 years. They were returning to New York City on a ship to retire. They had no pension. They were in poor health and filled with anxiety and discouragement. On the same ship was President Teddy Roosevelt. He was returning from one of his African safaris. When they arrived, no one paid any attention to the missionaries. On the other hand, there was lots of fanfare for the President.

The missionary turned to his wife and said, “God’s servants are forgotten!” When they docked, a band played for the President. The Mayor of New York City and other dignitaries were present. The newspapers put the story of the president’s arrival on the front page. But no one noticed as the two elderly missionaries walked off the gangplank. They moved into their cheap apartment in a poor neighborhood.

That first night the missionary’s spirit broke. He said, “I can’t take this. God is not treating us fairly!” His wife suggested, “Go in the bedroom and tell that to the Lord?” Later, he returned to the living room. The wife noticed that he was much more relaxed and seemed to be at peace. She asked, “Dear, what happened?” The missionary said, “I asked God, ‘God, why didn’t anyone welcome us home?’ God said to me, ‘But Charles, you’re not home yet!’”

1 John 2:15-17 says, “Do not love this world nor the things it offers you, for when you love the world, you do not have the love of the Father in you. For the world offers only a craving for physical pleasure, a craving for everything we see, and pride in our achievements and possessions. These are not from the Father, but are from this world. And this world is fading away, along with everything that people crave. But anyone who does what pleases God will live forever.”

So, you and I can board a plane that’s heading nowhere fast, or we can choose the path that leads to forever! That’s how meek people live. Meekness is self-control that manifests itself in a gentle spirit that is based in an unshakeable confidence in God.

WHAT A GREAT PROMISE! Happy and blessed are the meek… for the meek will inherit the earth!

"Steve Sabol was born October 3rd, 1950 in Bristol, PA. He married Nancy Keller, the love of his life on July 12th, 1969. They celebrated their 50th wedding anniversary in 2019. They have a son and a daughter, five granddaughters, and five great-grandchildren. Steve entered full-time pastoral ministry in August of 1980. He’s been a shepherd for over forty years. He moved to Lebanon thirty years ago and today serves as one of Lifeway Church’s community pastors. Steve has been a musician for over fifty years and his favorite instrument is the guitar. Ministering to men in prisons, churches, rescue missions and community centers has been a passion of Steve’s for over 12 years. He has spoken at over thirty men’s events across the country and sends out a daily inspirational email to over 6,000 men every day. He is currently writing a book titled “Connected” which should be available in the summer of 2020. Steve loves spending time with his bride, and staying busy for the King, changing the world one man at a time."
← How Our Cup Overflows Blindsided →