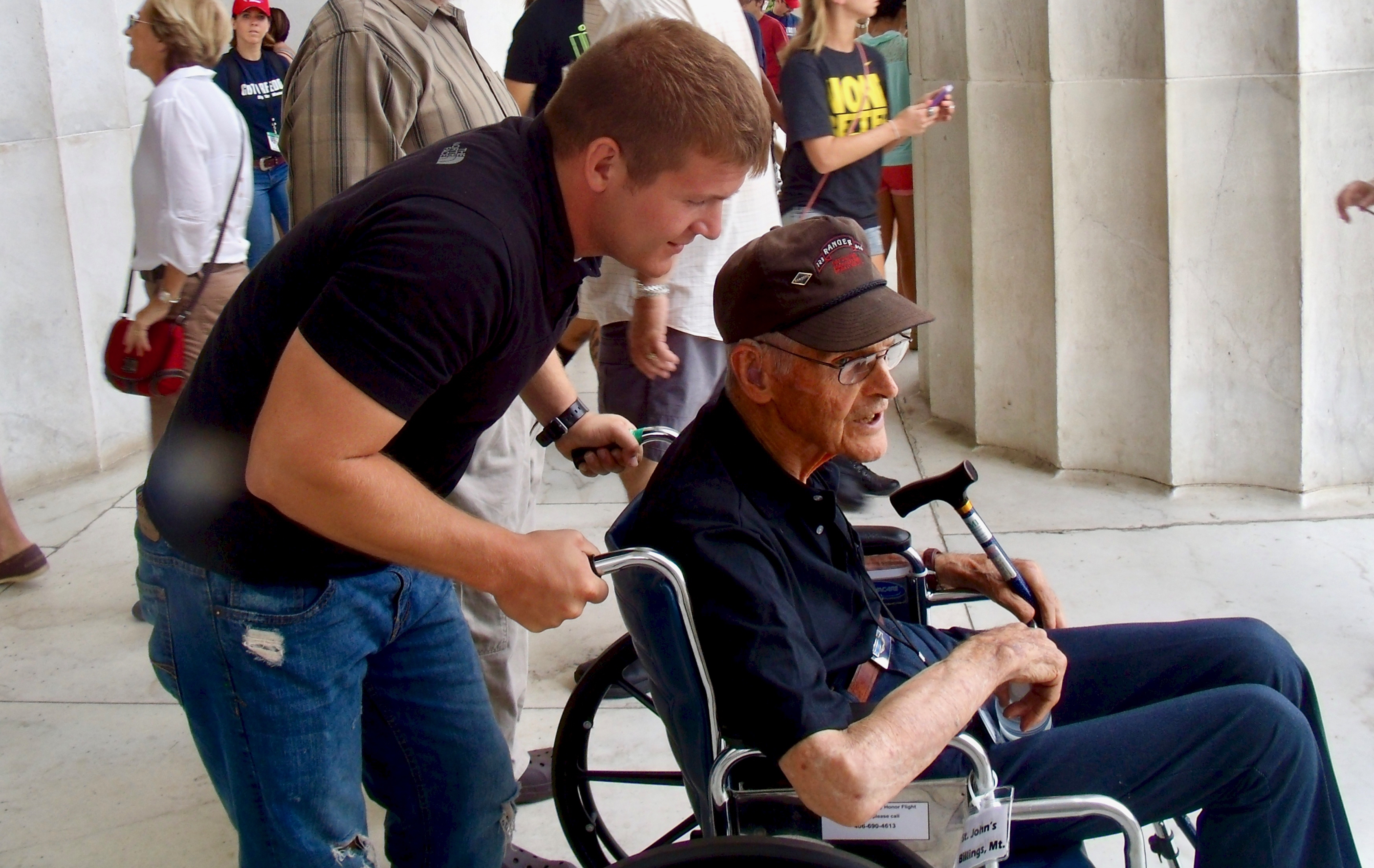 Young Alvin was just 25 years old. The English Channel was rough and the Higgins boat was tossed to and fro in the stormy waves. The soldiers next to him were nervous.  The channel was filled with Higgins boats – as far as he could see – 4000 boats and 12 battleships approached Omaha Beach. Thousands of aircraft dropped 11,000 tons of bombs in the hours preceding the landing. This was a big war, and this was the biggest mission yet. It was June 6, 1944.

For a moment he thought, “What if this is it? What am I doing on the other side of the world?” The sea got to him. His nerves got the best of him. He didn’t know if he could do this. He put his hand over his heart – yes, his Gideon Bible was still in his pocket. Seasick, he prayed. He heard the bombs. The gunfire, automatic weapons, semi-automatic weapons, yells from the men as they stormed Normandy beach. The drone of aircraft and the sound of the waves filled his head. He whispered, “God, keep me safe. Let this mission be successful. I commit this day to you.”

The front ramp of the boat opened and his feet touched the solid sand beneath the waist deep water. The seasickness immediately dissipated. New courage welled up. Flanked by Frank and George, his best buddies, they ran through the chilled salty water, staying low, keeping the target as small as possible, mindful to keep their weapons dry.

Bullets pierced the surface of the water, too close – much too close. Little splashes as the enemy gunfire hailed around them. Something knocked the wind out of him.  His buddies fell.  Whatever hit him nearly spun him around. He exclaimed, “Frank! I think I’m shot!” but Frank wasn’t there. He looked back and called, “George! George!”

Bodies floated near the bloodied shore water as Alvin crawled to the sandy beach where he collapsed. The battle raged around him as he drifted in and out of consciousness.

Nearly four decades later I sat outside the midwife’s door listening to the car radio. It was August 2, 1990 and Iraq had invaded Kuwait. Within two days Iraqi forces had overrun Kuwait. I looked at my husband. “Is this child being born for war?” The world stage was uncertain. The events developing before our eyes were of Biblical proportions. America joined forces and answered the call from Kuwait. The Gulf War was just launching. Despite his big sister’s prayers for a sister, I gave birth to Cody, a boy destined to be a soldier.

“Do you even know what a nightmare is, Cody?” I asked.

He pulled out his sister’s history book and opened it to a picture of a civil war battle. He hit the picture emphatically with his index finger and exclaimed, “This is a nightmare!”

Twenty years passed. Kuwait had been liberated, and America had military bases there. Cody had joined the Pennsylvania National Guard. He was getting ready for his first deployment. Ironically, he was on his way to Kuwait. He was a bit embarrassed to be going to Kuwait. It was considered by others in the military as a “country club”. No fighting or unrest. It was just a peacekeeping mission. He had trained for combat – this wasn’t combat.

Cody saw a different world – one not grounded in Jesus, one where human lives really didn’t matter. His eyes were opened to a whole different type of people – not only the local Kuwaitis but living in less than desirable conditions with his military buddies. Iron sharpens iron – and living together for extended periods of times can do the same.

When he came home he was troubled.

“Mom, Grandpa is a war hero. He fought in one of the most famous battles in history. I feel like I did nothing.”

“Did you accomplish everything you were supposed to do?”

“Your grandfather did nothing different. He did what he was told to do. He volunteered for the draft before America was involved in World War II. He just followed orders, went where he was told and was the best he could be.”

I paused, to see if Cody understood what I was saying about the role of a soldier. It was important because there was a life lesson that pertained to all of life.

“I used to beg your grandpa to tell me stories of the war. He had a big scar on his abdomen and his back where the bullet pierced his body. I wanted him to tell me all about it,” I continued. “I always wanted him to bring out the galvanized box that he showed you at Grandma’s funeral. He had the Pennsylvania National Guard Keystone. The Montana farm boy was first stationed with the same unit you are in – the PA National Guard stationed at Ft. Indiantown Gap. That’s ironic in itself. The galvanized box had his purple heart and other medals. It had the telegram informing his parents that he had been wounded in the D-Day invasion and informed them that any correspondence should be directed to an English hospital. But above all his medals and letters, the most prized item in that box was his pocket Bible pierced with shrapnel that the doctor said very likely saved his life. But he didn’t feel like he did anything. He just did what he was told.”

“His position in the army wasn’t his identity when I was growing up. He was a farmer, a prominent person in the community and the church. He visited the shut-ins and took a large reel-to-reel tape recorder to them through the week so they could hear the church service. He spent hours studying his Bible preparing the Old Testament lessons he taught his 5th grade Sunday School class.  He wasn’t amused by Hogan’s Heroes or any other show that made light of the war. He was grateful he didn’t have to shoot anyone – I’m pretty sure it would have messed with his head – he did exactly what he was supposed to do. He was an obedient soldier.”

It isn’t much different as a Christian. God doesn’t call us to be heroes. He understands our desire to be great – in Matthew 20:25 – 28 it says, “Jesus called them together and said, ‘You know that the rules of the Gentiles lord it over them, and their high officials exercise authority over them. Not so with you. Instead, whoever wants to become great among you must be your servant, and whoever wants to be the first must be your slave, just as the Son of Man did not come to be served, but to serve and to give his life as a ransom for many.’”

Acts 1:8 “But you will receive power when the Holy Spirit comes on you and you will be my witnesses to me in Jerusalem, in all Judea and Samaria and to the uttermost parts of the world.”

“Grandpa was sent to fight a battle. The battle was won. You were sent to stand watch where another battle had been fought to make sure the ground that was retrieved wasn’t lost again. One call isn’t above the other. Both are necessary. Was one mission more dangerous than the other? It didn’t matter – the soldier will follow orders. In the end, obedience to your commander was all that was asked of you.

Do you wish you could be great? Do you wonder how life passed you by? Do you feel like a nobody? Do you need a friend? Do you have regrets, and feel like you are stuck. There is hope – but sometimes “man’s ways” are not “God’s ways”. If you want to be great, be a servant of all. (Matt 20:25) If you give, it will be given unto you. (Luke 6:38) If you want a friend, show yourself friendly. (Prov. 18:24) Forget what lies behind and straining forward to what lies ahead, press on toward the goal for the prize of the upward call of God in Christ Jesus. (Phil. 3:13)

Kathy Rice has lived in Pennsylvania since marrying her husband in 1977. She was born and raised in Montana, and attended Montana State University and YWAM’s School of Evangelism in Bozeman. She met her husband on a wagon train that went across the United States in 1976 during the bicentennial with Youth With A Mission. She attended Christ for the Nations in Dallas, Texas, and worked in Haiti among the impoverished nationals where her first child was born. Her six grown children currently live in central Pennsylvania, and she enjoys time with her thirteen grandchildren. Kathy has authored a book, Kathy Run, telling of her young life on a farm in northeast Montana while attending a one-room school. She is currently a Realtor® with Re/Max of Lebanon County. Many of her inspirational pieces are drawn from her experiences on the farm, on the mission field, and raising her family next to her husband, Donnie Rice.
← Bigger Than Me Jamie's Mouse →