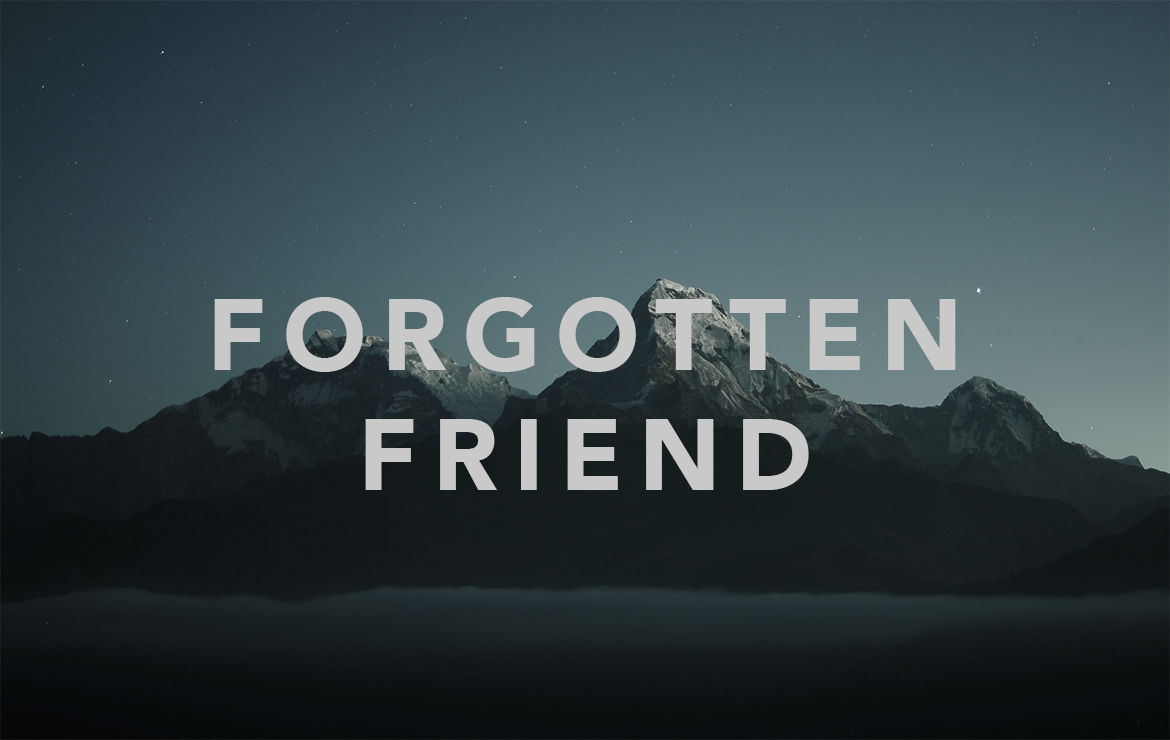 A friend of mine operates a non-profit reptile sanctuary called Forgotten Friend. He has a love and appreciation for snakes, lizards and turtles that most people do not have. That may explain why they are usually forgotten.

The idea of a forgotten friend is playing around in my heart and head today. The concept is the inspiration for this blog post.

There’s nothing quite as deflating as being forgotten by a friend. I once had a breakfast meeting set up with an acquaintance and he never showed. I remember being embarrassed, drinking one cup of coffee after another as the waitress checked back with me periodically. “Would you like to order now, or still wait?” she would ask. “I’m sure he’ll be here,” I would tell her. “Let’s give him a few more minutes.” I watched for his car outside the diner window, but he never came. Finally, I paid for my coffee, thanked the waitress for her patience, and slipped away. My friend texted me later to apologize, and I told him it wasn’t that big of a deal. He had no real excuse, he had just forgotten. I didn’t hold the episode against him, but I have to be honest and say that it hurt. Somehow you hope that you mean enough to your friends that they won’t forget you.

What is even worse is that there can be times when it feels as if God has forgotten us. When life beats us down and gets the best of us, it’s easy to think we’ve been deserted. Maybe He’s busy putting out fires elsewhere, we think to ourselves. And our prayers begin to feel empty and distant. That’s why it’s so important to stay in God’s Word because it reminds us that God is always near. Especially when we feel the most neglected.

I love the following passage, especially during the times I feel like I am a forgotten friend…

“Can a mother forget her nursing child? Can she feel no love for a child she has borne?” God asks us through the prophet Isaiah. Never! “But even if that were possible, I would not forget you!” (Isaiah 49:15)

Although it’s hard to imagine it, God says to us, “a nursing mother might just forget her baby. It’s possible, though not very probable. But one thing is not possible. I could never forget you.”

I have a tattoo on each of my eight fingers. I did them myself with a sewing needle and Indian ink when I was a rebellious 15-year-old boy. Fifty-five years later the ink is still there. And each time I see them I remember the who, what, where, when and why behind them. They are stark and constant reminders that never go away. Did you know that God seems to indicate that he has tattoos?

God goes on the say this to the prophet Isaiah…

“See, I have engraved you on the palms of my hands” (Isaiah 49:16). Like an obsessed lover, God has had our names tattooed on his hands. He won’t forget us. When you feel forgotten by God, just close your eyes and envision the hands of the Almighty. And remember his words: “I could never forget you.”

Yes, if you are in Christ, you are a friend of God. And no, unlike human friends, he will never forget you, leave you or forsake you!

When was the last time you felt abandoned by God? Is it today? Then find comfort in knowing that he will never forget you. Your name is carved on the palm of his hand.

You can have your name written in the Book of Life! That is the good news. Leave me a comment and I will tell you how.

"Steve Sabol was born October 3rd, 1950 in Bristol, PA. He married Nancy Keller, the love of his life on July 12th, 1969. They celebrated their 50th wedding anniversary in 2019. They have a son and a daughter, five granddaughters, and five great-grandchildren. Steve entered full-time pastoral ministry in August of 1980. He’s been a shepherd for over forty years. He moved to Lebanon thirty years ago and today serves as one of Lifeway Church’s community pastors. Steve has been a musician for over fifty years and his favorite instrument is the guitar. Ministering to men in prisons, churches, rescue missions and community centers has been a passion of Steve’s for over 12 years. He has spoken at over thirty men’s events across the country and sends out a daily inspirational email to over 6,000 men every day. He is currently writing a book titled “Connected” which should be available in the summer of 2020. Steve loves spending time with his bride, and staying busy for the King, changing the world one man at a time."
← Piranha Pandemic Of Grief and Guilt →