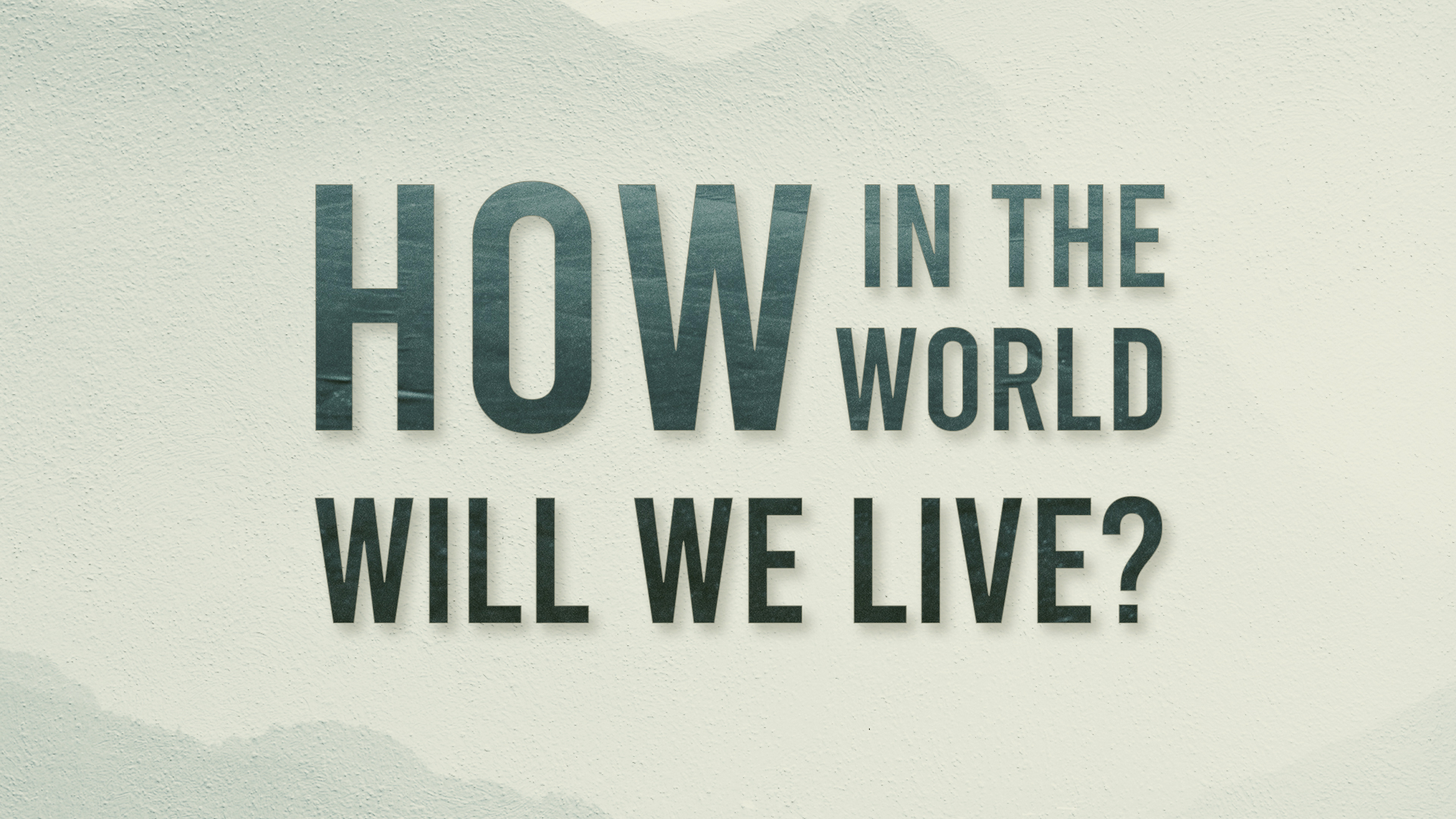 How in the World Will We Live?

There are really only three basic world views in life: Hedonism, which is the desire for pleasure; Materialism, which views possessions as all-important; and Narcissism, which is “I’m all that matters”. These aren’t new philosophies. God talked about them in 1 John 2:16 when he said, “For all that is in the world, the lust of the flesh, the lust of the eyes, and the pride of life is not of the Father, but is of the world.”

How do you live in a world like that without being controlled by those kinds of attitudes? I want to give you four strategies on how live in the world without being of the world.

You need to use the mind God gave you. Don’t automatically buy into everything you see, everything you hear, every idea that’s promoted on television or radio or through social media. Question, challenge and properly assess popular opinion. Does it make sense or not?

The apostle Paul encourages us in I Thessalonians 5 to “Test everything. Hold on to the good. Avoid all evil.” Everything! That means to test music, TV programs, books, magazines, and movies. Test everything! Everything includes news show hosts, radio psychologists, and preachers. Everything!

What’s the standard of evaluation? The Bible. The Bible has outlasted every culture throughout history.  It has a track record. We use this as a standard to evaluate everything. Is it right? Is it true? Is it what God says?

Use your mind, evaluate, and test everything.  Don’t automatically accept what the world says.

The old saying rings true: “If you don’t stand for something, you’ll fall for anything.” There’s a lot to fall for today. You need to develop some strong convictions to counteract culture. There is great pressure in our culture to conform. To a large degree, the expectations of others determine how we dress, talk, act, eat, buy, spend our money, and spend our time. We are constantly pressured by the culture around us. The #1 question can easily become, “What will other people think?”

Again, the apostle Paul comes through for us in Colossians 3:20, “With Christ, you have died to the elements of this world. Then why … do you let others dictate to you?” There are so many people who base their self-worth on the opinion and approval of others. If God accepts you and approves of you, what does it matter what other people think? It doesn’t really matter.

The point is this: Is popularity worth selling your soul for? Absolutely not. To lower my standards and do something I know isn’t right just in order to be popular, is very short-sighted. The one who does the will of God abides forever. Which is going to have a longer-lasting benefit – getting the approval of God or getting the approval of other people who won’t even remember you five years from now?

As a new Christ-follower in 1975, I hung a poster in the room where I had my daily quiet time. It contained a quote from a martyred missionary named Jim Elliot who once said, “He is no fool who gives up what he cannot keep to gain that which he cannot lose.”

So, what does “the world” mean here? It’s talking about the world’s value system that says pleasure, power, position, and possessions are everything. The word “world” here in Greek is the kosmos from which we get the English word “cosmetics.” The world’s value system is shallow. It doesn’t run deep enough. It’s superficial.

We must not have divided loyalties. We can’t love God and love what the world loves at the same time.  They are mutually exclusive. The point is this:  God wants our full allegiance. He wants us to love Him with all our hearts. In Matthew 22:36, Jesus said, “Love God exclusively!”

Many years ago, I came across a poem written by a guy named Wilbur Rees. It’s titled, “Three Dollars Worth of God.” It impacted me greatly, and continues to do so to this day…

Let’s determine to not be that kind of Christ-follower! That’s not the way real love works. What if, when I married Nancy 52 years ago, I said to her at the altar, “I will be faithful to you every Sunday morning. But you give me the rest of the week.” Partial faithfulness is unfaithfulness. Unless you’re faithful all the time, you’re not being faithful at all.

4 – INFLUENCE OTHERS FOR GOOD.

Philippians 2:15-16 nails it when it says, “You are to live clean, innocent lives as children of God in a dark world … shine out among them as beacon lights, holding out to them the Word of life.” Like stars stand out on a dark night, that’s how my lifestyle is to be as a Christ-follower. We are to be distinctively different than the culture. My lifestyle is to be such a bright contrast to the culture that I shine out like a star.

God wants you to make an impact with your life for good. When you put your faith in Christ, you became God’s agent in the world. He doesn’t want you to be a secret agent. He wants other people to know it. He wants us to influence others.

Who’s going to be in heaven because of you? If you can’t immediately think of somebody, I’d say you’ve got some work cut out for you. Christianity is more than just something you believe. It is a lifestyle. That lifestyle involves four things:

"Steve Sabol was born October 3rd, 1950 in Bristol, PA. He married Nancy Keller, the love of his life on July 12th, 1969. They celebrated their 50th wedding anniversary in 2019. They have a son and a daughter, five granddaughters, and five great-grandchildren. Steve entered full-time pastoral ministry in August of 1980. He’s been a shepherd for over forty years. He moved to Lebanon thirty years ago and today serves as one of Lifeway Church’s community pastors. Steve has been a musician for over fifty years and his favorite instrument is the guitar. Ministering to men in prisons, churches, rescue missions and community centers has been a passion of Steve’s for over 12 years. He has spoken at over thirty men’s events across the country and sends out a daily inspirational email to over 6,000 men every day. He is currently writing a book titled “Connected” which should be available in the summer of 2020. Steve loves spending time with his bride, and staying busy for the King, changing the world one man at a time."
← When I Am Not Enough Shattered Beauty →