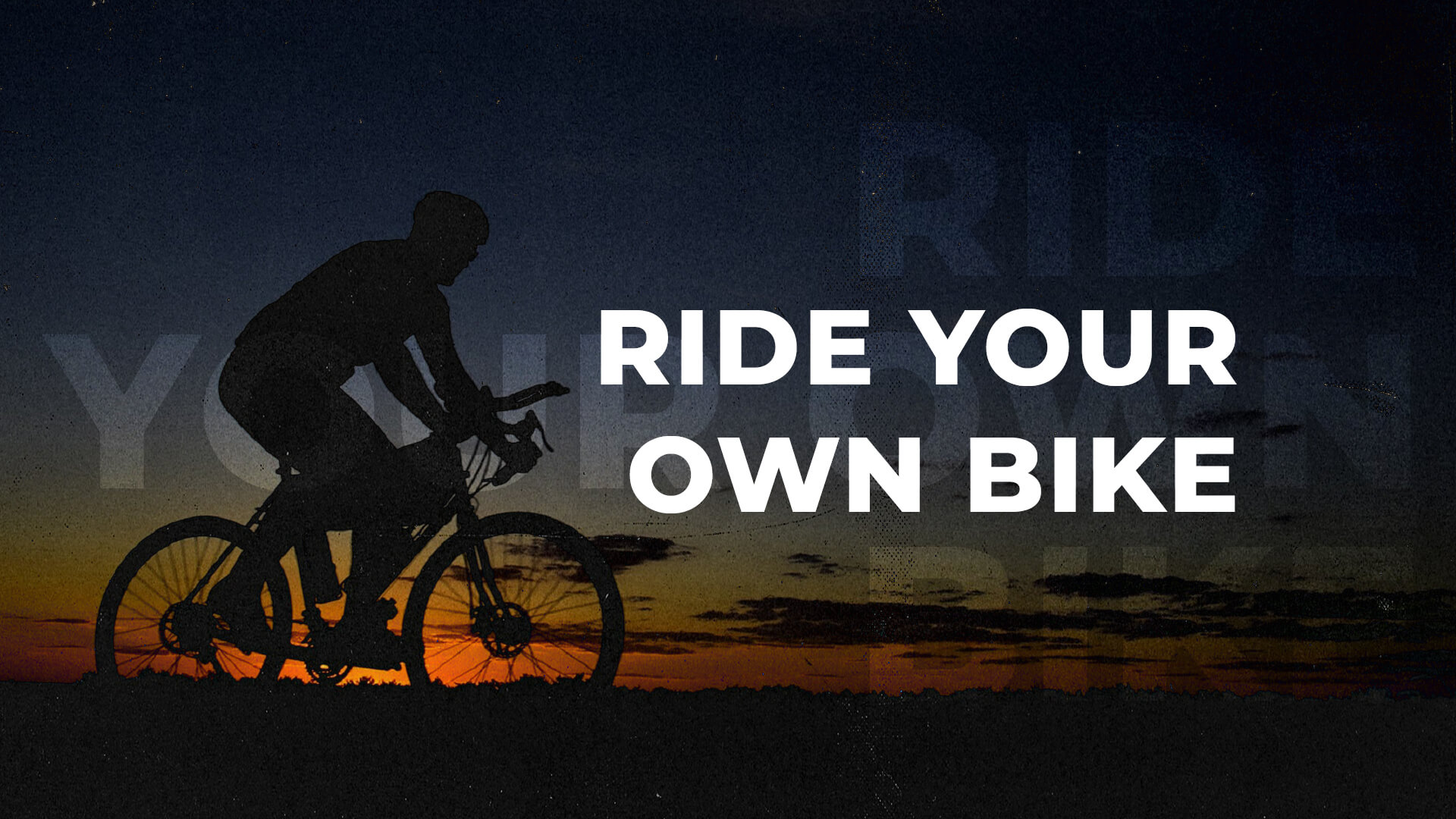 Ride Your Own Bike

Once upon a time, my little sister and I decided to trade bikes, just for fun.  Although our bikes were of similar size, mine was yellow with a banana seat, and hers was blue with a saddle seat.  I remember being a little envious of her bike, even though mine was technically newer and more modern.  But as children around the world are known to do, I couldn’t help but want what she had, just because it was different from mine.

I promise I had zero malice in my heart as we mounted each other’s bikes that day.  My dear sister went first, starting out at the top of the hill in front of our house.  Unfortunately, it never dawned on me to explain to her that our bikes had one more distinctive difference.  Her bike had coaster brakes, activated by pedaling backward; mine had the more “grown-up” hand brakes.

I watched in horror as Gayle whizzed down the hill, crossed our lane, miraculously missed the trees that lined the edge of the property, and disappeared over the bank, landing on the side of the road.  I could not imagine, in my wildest dreams, why she didn’t brake, or at least turn right and head down the lane.  I froze momentarily, convinced she was dead, if not from the bike accident, then surely from a passing motorist.  I finally recovered enough to yell for my mom, and together we rushed to make sure she was okay.  Thankfully, there she was, pushing my bike up the side of the road, no serious injuries, but a bit miffed at the men working on the roof of the house across the street who gave her a cursory glance and then resumed their work.

To the best of my recollection, we never traded again.  Lesson learned that day: ride your own bike.

We talk a lot about spiritual gifts in the church, and to be sure, this is an important and valuable distinction, knowing what you have been particularly gifted to do.  The problem is, much like my sister and me, we tend to focus on what the other person might be driving, and sometimes, we are tempted to try out their gifting as our own.  I believe the apostle Paul was encouraging us to “ride our own bikes” in the following scripture:

Sounds like a nice, neat, little package, doesn’t it?  But somehow, we’ve twisted it all around.  The prophetic people sometimes envy the simplicity of the lives of those who serve, while those who serve wish for the attention given to those who teach.  The ones who teach want the favor and goodwill received by the encouragers, who in turn often long to make a measurable impact like those who give.  The givers, who are typically anonymous, hope for the accolades given to the leaders, while the oft-criticized leaders envy the generally beloved merciful ones.  You get the picture?  We think everyone else is riding a better bike than ours.

How do we stop the madness?  I believe that somehow, we’ve lost our perspective on why God gave us these gifts in the first place.  1 Corinthians 12:7 clearly says it is for “the common good”.  Not so we feel good about ourselves.  Not to draw attention to ourselves.  No, these gifts were meant for the good of those around us.  Oh, it doesn’t mean we can’t enjoy using our spiritual gifts.  It just means they were always meant to be shared.

There are two ways to combat the envy that threatens to divide us when we find ourselves wishing God had distributed the gifts in a different fashion.  Gratitude and honor help us to recognize and value what we’ve been given and to simultaneously recognize and value the gifts other have received.  Truly, we need both perspectives in order to walk with a healthy mindset.

Gratitude births humility, and from that vantage point, we are focused on God’s goodness rather than our own worthiness.  The truth is, I deserve nothing, and therefore I am free to enjoy whatever has been bestowed upon me.  I have a friend who raised a large family, and I was amused by her strategy to teach her children how to appreciate what was given to them.  She would intentionally cut a pie or cake into different-sized slices.  You got what you got and learned to be thankful for it.  Sometimes, however, we are tempted to equate gratitude with pride, but in an effort to cling to our humility, we’ve ultimately just given pride a facelift.  Pride shines the spotlight on us, whereas gratitude focuses on the generosity of God.

Honor builds a bridge between us and another person, allowing our spiritual gifts to work together in meeting the needs of those around us.  Like the pieces of a puzzle designed to fit together, honoring others builds the framework for teamwork.  There are no lone rangers in the body of Christ.  Whether our independence is rooted in pride, arrogance, or fear, we were ultimately designed for partnership.  When the enemy tries to sow discord and strife, the best way to turn the tables on him is to employ the strategy of honor, which will mend instead of tear.

If you are struggling to believe that your spiritual gift matters, be encouraged by the apostle Paul’s words to his spiritual son, Timothy.  “Don’t minimize the powerful gift that operates in your life,” (1 Timothy 4:14 TPT).  So, it’s not a question of whether you’ve been given a gift.  You have.  And it’s not a question of whether or not you should use your gift.  You must.  Be inspired to maximize what you’ve been given and enjoy riding your own bike!

I’m Renee. Wife of one awesome husband and mom to two beautiful daughters and one terrific son-in-law. I like antiques. Old ones with original chipping, peeling paint. I like to rearrange my house and bake things like whoopie pies. I like making lists and checking things off of them. I like pretty napkins and warm vanilla sugar body lotion. I like Hershey Almond Bars, and I think they taste best frozen. I like to read and write and imagine the day someone might actually buy what I’ve written.
← I Love You with All My Mind The Solution to Self-Centeredness →