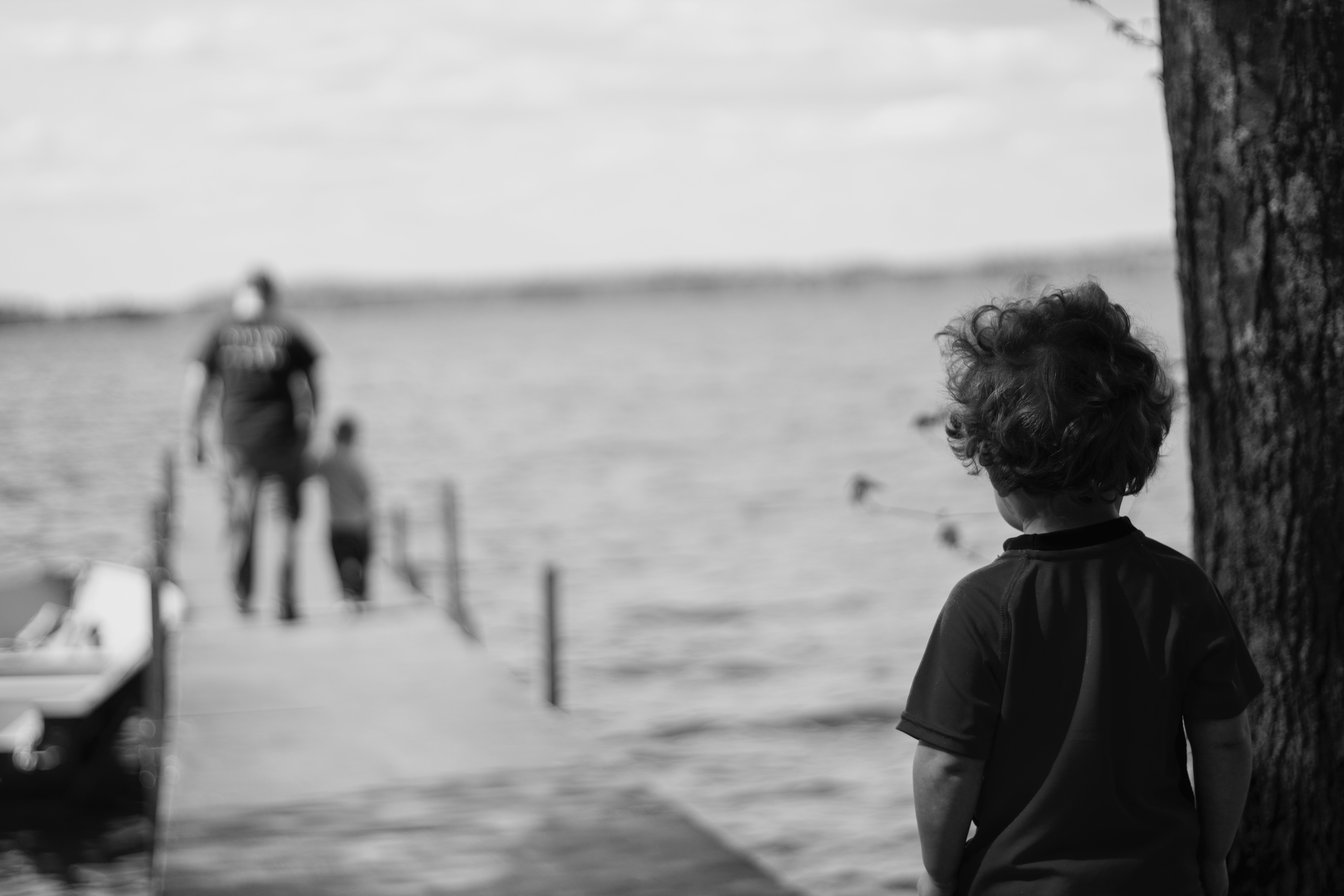 When Jen was just five years old, her father walked out of her life. He struggled with alcoholism, but she didn’t understand that. After the divorce, her father tried to stay involved in Jen’s life but he could not shake his addiction, and weekend visits soon turned to phone calls on Christmas and birthdays. When she was nine years old, she fell asleep by the telephone sobbing because her dad forgot to call.

Jen’s mother tried to protect her daughter from the continued crushing pain of rejection Jen was experiencing, but she was angry too. Jen was beginning to make her own conclusions.

“I’ll never trust a man as long as I live,” she declared.

Jen got married, and her husband was rarely home. It was as though he couldn’t please her, so he immersed himself in his work. Her children’s father was as absent as her own had been, but she didn’t expect any more of him. The more she argued and demanded him to be part of the children, the more he avoided coming home.

“Just like any other man. Untrustworthy,” Jen angrily concluded.

She needed new doors and windows installed in her home and called a highly recommended carpenter to do the job. Builder Bob was reputable and competent, but everything went wrong. The door installation took longer than anticipated, there was rotten lumber in the window sills, and he had to make several trips to the lumberyard for more materials because he made mistakes that he had never made before.

“Incompetent men – but what did I expect?” she thought.

Pain in a relationship is something we all experience. It seems unfair, but our relationships, and how we deal with the injustices we witness affect every aspect of our lives as we continue in the journey of life.

The response to an injustice done to you determines the direction your life will go. Forgiveness brings sweet fruit, refusing to forgive, critical and condemning judgments bring bad fruit. No matter how bad the deed is, unforgiveness keeps the victim in bondage.

Forgiveness isn’t letting the offender off the hook, but it releases the victim to live in freedom.

“A root is a practiced, hidden, and automatic way of drinking nurture from God, others, ourselves and nature.” (John Sanford – Elijah House)

When a person has a recurring problem in their life, there is a root problem that is controlling that aspect of their life. In Jen’s situation, her father let her down (in a big way). She judged her father and determined all men were incompetent.

“Do not judge lest you be judged. For in the way you judge, you will be judged; and by your standard of measure, it will be measured to you.” Matthew 7:1-2

She was just a little girl. She buried the hurt and went on in life unaware she was holding resentment and unforgiveness. The seed, the bitter root judgment was started. As she encountered men, her judgment created an expectancy: “they are all alike”, and she “put out the self-fulfilling prophecy, by which we tempt people to fulfill our negative picture of the way things should go.” Sanford

We reason that Jen had every right to be upset with her father. But her reaction (unforgiveness) created a bitter-root. That bitter root poisoned instead of nourished, and she did not recognize how she tempted men to fail her.

Some bitter roots stem from a perceived injustice. A parent who is killed in a car accident can leave a child angry and feel abandoned by the deceased parent. Maybe the child is deprived of the lifestyle the child sees in his friends. Maybe you had four children and your firstborn thinks you should have stopped with him – he feels deprived of your undivided attention. Maybe you homeschooled and your child feels deprived of the school experience. Maybe you sent your child to public school and your child feels you didn’t invest personally in his upbringing like his homeschooled friends. Maybe you can’t get your child a horse like his friend. Any situation perceived by an individual as unfair or unjust can lead to a bitter root judgment, growing into a plant full of bad fruit. (Bad fruit could include shoplifting, coveting, selfishness, no self-control, depression, sickness, foul disposition, narcissism, etc.)

Sometimes a person feels betrayed by God for their situation. Of course we outwardly know God is just and loving, but we bury the anger and bitterness for injustices that happened in our life. We need to ask God to forgive us of our anger, but we need to forgive God for what we perceive as unjust. For healing, we acknowledge that He is God, and decide to trust Him even when we don’t understand.

I recently heard the account of Eva Mozes Kor, a survivor of the Holocaust, and her journey as she learned the valuable lesson of forgiveness. She and her identical twin sister were ripped from the arms of their hysterical mother as they cried and screamed her name. They never saw their family again. Dr. Mengele, an infamous German SS officer and physician, headed up gruesome, unthinkable experiments on identical twins. Many did not survive. But by the grace of God, Eva and her sister did survive and they were rescued at the end of WWII from the camp where they were held captive.

In her old age, after living for years with bitterness and unforgiveness, Eva realized she had to forgive the doctors to find freedom. She heard that one of the doctors was still alive and finally arranged to meet the doctor who had performed many of the experiments on her.

After meeting the grief-struck, repentant doctor, she felt compelled to fashion a letter of forgiveness. Her friend helped her translate her letter of forgiveness. As hard as that was for her, Eva’s friend challenged her that her real problem was the doctor that was in charge of the entire project. Her friend told her to imagine Dr. Mengele was in the room, and talk to him, forgiving him for the horrible deeds that she endured. This was unthinkable, but she was finally able to bring herself to the place where she could confront the demon that destroyed her family and tried to destroy the twins. The act of forgiveness freed her from the terrors and memories from her past. At the end of her interview, she said, “You can’t change what happened, but you can change how you relate to it.”

Just like Eva, Jen had to recognize the bitter root that was holding her captive. The sin of addiction, rejection, and abandonment wasn’t Jen’s sin. That belonged to her father. Her judgment of her father was the sin. She had sown a seed, a bitter seed that grew, and the fruit was strong enough to control the people around her. Her husband, although not a drunk, abandoned her just like her own father did. The bad fruit from her bitter root judgment was strong enough to confuse Builder Bob, and while doing her job, he made mistakes he had never made before.

When we find ourselves struggling with a recurring problem, take it to the Lord in prayer. Ask Him if there is something that is holding you back from experiencing His ultimate for you. He wants to bring you to a place of repentance and forgiveness. No matter how badly you’ve been wronged, a lack of forgiveness brings destruction. Through prayer, allow the Lord to bring you to the place you were wronged. It’s there you have the power to forgive, and it’s in forgiveness that God empowers you to live freely.

Heavenly Father, I ask that you reveal those who have wronged me, whether for real or perceived. (Pause and allow the Lord to reveal the person or situation.)

Pray: Lord, I forgive (*Dad) for (list the infraction)___________. Please forgive me for judging/hating/holding malice against him. Forgive me for holding onto the anger I have carried. I release it to you and help our relationship to be established the way you want it to be.

God does not require us to establish a relationship with an abuser or toxic person, but forgiveness releases their hold on you.

“Forgive us our trespasses as we forgive those who trespass against us.”

Concepts for this blog from Elijah House – John Sanford

Kathy Rice has lived in Pennsylvania since marrying her husband in 1977. She was born and raised in Montana, and attended Montana State University and YWAM’s School of Evangelism in Bozeman. She met her husband on a wagon train that went across the United States in 1976 during the bicentennial with Youth With A Mission. She attended Christ for the Nations in Dallas, Texas, and worked in Haiti among the impoverished nationals where her first child was born. Her six grown children currently live in central Pennsylvania, and she enjoys time with her thirteen grandchildren. Kathy has authored a book, Kathy Run, telling of her young life on a farm in northeast Montana while attending a one-room school. She is currently a Realtor® with Re/Max of Lebanon County. Many of her inspirational pieces are drawn from her experiences on the farm, on the mission field, and raising her family next to her husband, Donnie Rice.
← Where is God When ______? Adapt or Die →