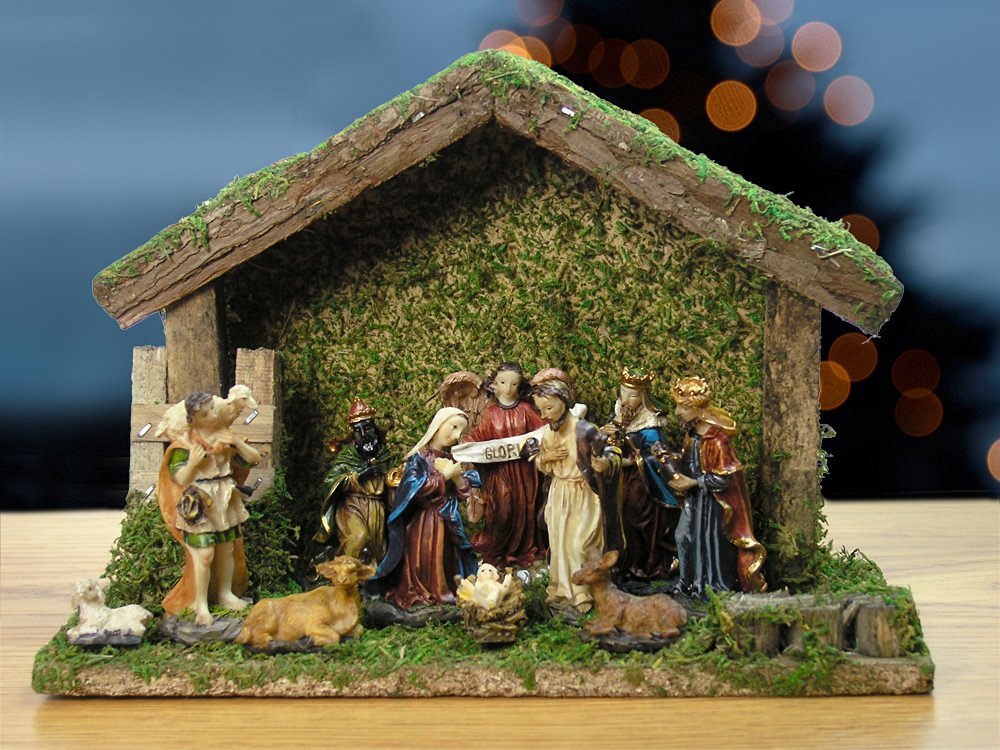 UNEXPECTED PEOPLE IN AN OUT OF THE WAY PLACE

While they were there, the time came for her to deliver her child. And she gave birth to her firstborn son and wrapped him in bands of cloth, and laid him in a manger, because there was no place for them in the inn. (Luke 2:6-7 CEB)

My bride Nancy and I are celebrating our 51st Christmas together this year. The primary Christmas decoration in our home has been the crèche (Nativity Scene). I am remembering one in particular that we had for many years. In addition to the figurines of people and animals, it included an interesting stable to represent that place outside the inn.

Hidden beneath the roof was an orange Christmas light bulb that gave the manger a warm glow when illuminated. There was also a music box attached to the back of it that played “Silent Night.” The figurines were not elaborate, but simple and beautiful.

Being the weird guy that I am, a man who has always been fascinated with the Christmas story, there were times I would turn off the lights in the house, click on the orange bulb, wind up the music box, and just stare at the scene.

Nativity sets are a fantastic teaching tool, filled with symbolism that supersedes what they lack in historical accuracy. But there is something else about the scene I am reflecting on this Christmas.

Sometimes things can seem a little “off.” Like the time I saw Keith Urban perform on TV for the first time. I was impressed with his Country musicianship. Being a guitar player myself, I loved the fact that he had a Fender Telecaster strapped around his neck, one that looked just like the one I am privileged to own. But, after the song, he was interviewed. He spoke with a distinct Australian accent. It seemed, with all due respect to Keith Urban and others, just a little bit off.

In some ways, the same thing can be said of the story our nativity scenes tell. At his birth, Jesus was surrounded by unexpected people in an out-of-the-way place.

Like the shepherds. One might expect to find representatives of the best and brightest greeting the newborn Jesus. Instead, shepherds are there. While we might picture them as quaint, peaceful figures, first century readers of the story would have thought differently.

Shepherds had a less than stellar reputation. They were poor, unkempt, and sometimes shoplifted the supplies they needed to get by. They were considered so untrustworthy that their testimony was not welcome in a court of law.

The figurine in our family nativity set of the clean-cut, strapping young man with the lamb across his shoulders, would have been unrecognizable to the people in Jesus’ day.

The town of Bethlehem was filled that night with people registering for the census and paying their taxes. Yet God sent the angels to a group working the nightshift on the outskirts of town. Instead of having well-respected business people in my nativity, I set up shepherds on one side of the stable.

And there were the Magi. On the other side, I set up some wealthy people who seem to fit the bill better. The wise men, or magi, were educated people of some means.

But the wise men are outsiders. They’re not Jewish, as one might have expected, and may not have been particularly religious. They most likely noticed the Star of Bethlehem while looking for life-direction from the celestial bodies, a pagan practice. They don’t belong, yet there they are on that silent, holy night.

And who can forget Mary and Joseph? Inside the stable, under the orange glow of the Christmas bulb, is a young couple. Joseph, a descendant of King David, has royal blood in his veins, as the genealogy that begins Matthew reminds us. But he is hardly living a life of privilege. He is a blue-collar craftsman eking out a living.

Mary, Jesus’ mother, is from a priestly family, which sounds promising. But it is her relative Elizabeth, who is married to a priest, not Mary.

Of course, there is the stable in Bethlehem. Jesus’ birth, which our crèches depict, takes place in Bethlehem, an unlikely place. Jerusalem, the heart of the Jewish world, is just over 5 miles away. Even the Wise Men assume the messiah would be born there, which is why they stop in Jerusalem for directions.

Finally, Jesus’ bassinet is a manger, a feeding trough, presumably out in the stable, because there was no room for them inside, where a pregnant woman belongs.

The whole scene has this “just missed” quality to it. It doesn’t quite fit in with our expectations, like an Australian accent coming from a country singer.

I’ve been reflecting on this quite a bit this Christmas. Racial tension, hate, and mistrust are making news across the United States. Fears over the spread of disease are generating conversations about how much risk we should take to help people in danger. Immigration law is a prominent topic, causing many to reflect on our responsibility for the well-being of the “outsider.”

I can’t help but wonder this Christmas if Jesus is in places I might not expect still today. I expect to find him in the warmth of a secure home, but he’s out back in the stable. I expect him to occupy a seat of power, but he’s lying in a manger. I expect to find him among the rich and powerful, but instead he is surrounded by working folk, petty thieves, and those who don’t know where to go for direction.

This Christmas, I don’t want to miss Jesus. And I’m concerned because there have been times when I’ve looked in the wrong places. The long expected Jesus comes in unexpected ways and at unexpected times.

Be on the alert this Christmas!

"Steve Sabol was born October 3rd, 1950 in Bristol, PA. He married Nancy Keller, the love of his life on July 12th, 1969. They celebrated their 50th wedding anniversary in 2019. They have a son and a daughter, five granddaughters, and five great-grandchildren. Steve entered full-time pastoral ministry in August of 1980. He’s been a shepherd for over forty years. He moved to Lebanon thirty years ago and today serves as one of Lifeway Church’s community pastors. Steve has been a musician for over fifty years and his favorite instrument is the guitar. Ministering to men in prisons, churches, rescue missions and community centers has been a passion of Steve’s for over 12 years. He has spoken at over thirty men’s events across the country and sends out a daily inspirational email to over 6,000 men every day. He is currently writing a book titled “Connected” which should be available in the summer of 2020. Steve loves spending time with his bride, and staying busy for the King, changing the world one man at a time."
← Pocketbook Bandit A Thing or Two →