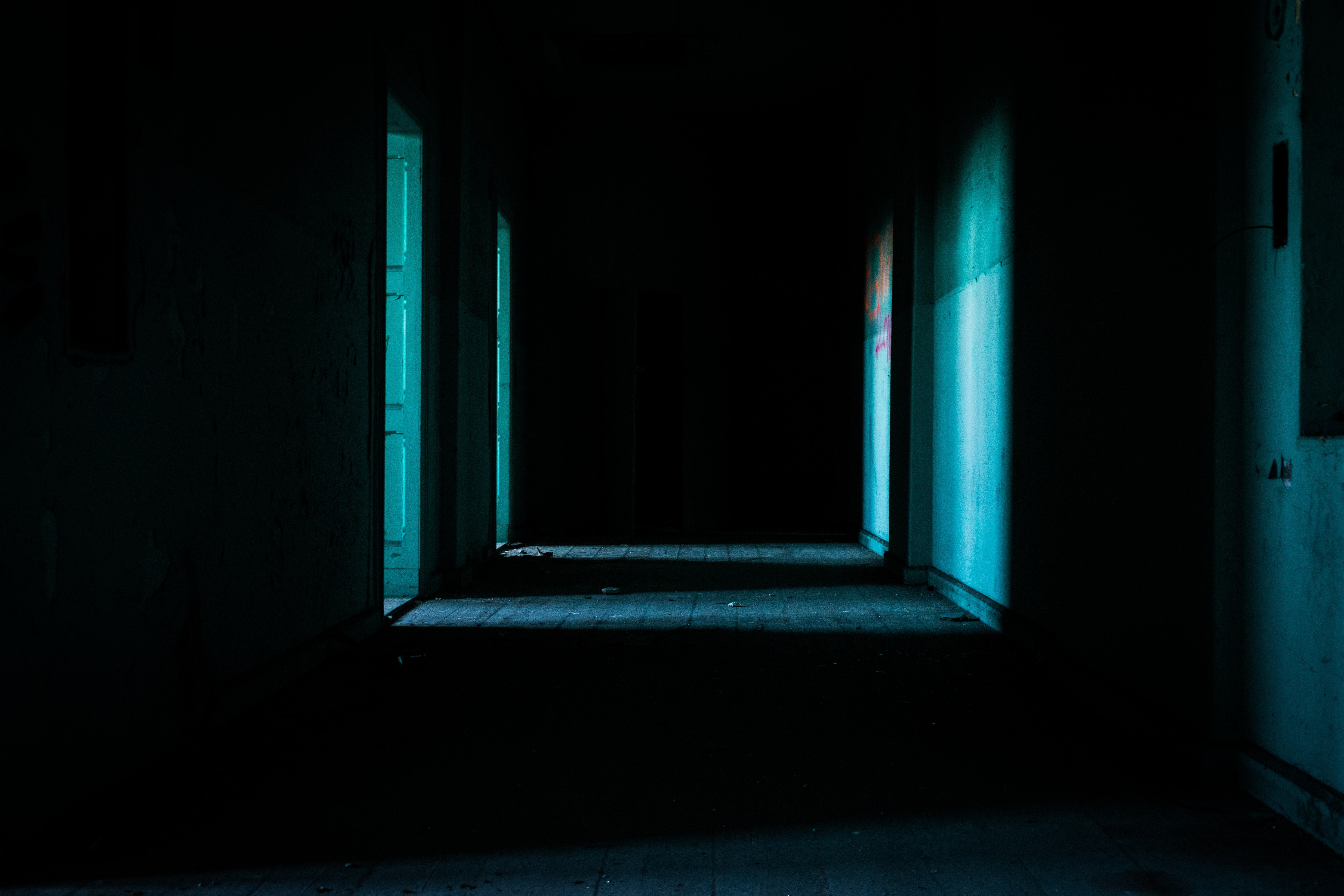 WHAT HAPPENS IN THE DARK

I’ve recently had several bad experiences in the dark.  I’m not talking about like when you’re a kid and you fear what could potentially be hidden in the shadows–all the monsters and bad guys our minds used to conjure up to keep us paralyzed and quaking under the sheets.  I recently spoke to a childhood friend, who remembered playing hide-and-seek in the dark at my house.  She recalled the terror of the surrounding woods at night and I had to agree with her.  It was petrifying.  But my present-day experiences were not of the imagination.  No, these were real, live incidences that happened due to … the absence of light.

I was in the kitchen, late at night, lights all turned off.  A stash of Hershey’s Kisses beckoned me to the cupboard.  Quietly I strolled over and retrieved one.  Not bothering to flick on a switch, I unwrapped it and popped it into my mouth.  Something was off.  More a texture issue than a taste one.  Undaunted, I kept chewing and swallowing, though something remained on my tongue.  I pulled it out of my mouth, and lo and behold, there in my hand lay a remnant of the white strip of paper that peeks out of the top of every Hershey’s Kiss.  Note to self: don’t try to sneak candy in the dark of night.

And then last week, I left someone’s house after dark, walked down her front porch steps, and clipped the corner of a flowerbed lined with rocks.  My foot caught the edge, full force, and the pain was so intense I thought I might pass out.  I sat in my car fighting back tears and mentally kicking myself for my carelessness.  I feared I may have broken a toe or two, and sure enough, a black and blue splotch spread over half my foot in the days that followed.  I couldn’t even bend my foot or wear certain shoes for a week.  Note to self: watch where you step in the dark.

Or better yet … how about walking in the light and not sneaking around in the kitchen to snag a piece of candy?  The Bible has a lot to say about the light and what happens to those who choose it … and those who don’t.  It’s a big difference.

Proverbs 4:19 says “The way of the wicked is like deep darkness; they do not know what makes them stumble.”  Yep, that pretty much describes it.  I didn’t know what I was chewing on.  I didn’t know what I tripped over.  You see, darkness causes us to do things in secrecy or ignorance, things that lead to misery or death or destruction.  And I’m not just talking about broken toes.  I’m talking about broken lives and broken bodies and broken families.

You know what happens when you’ve been in a dark movie theater and you come out into the daylight?  Your eyes squint and you have a hard time adjusting to the sunshine.  It’s uncomfortable until you get acclimated to a new environment.  I’m convinced the same thing happens when we are living in spiritual darkness and God shines His light on something that needs to be exposed.  Initially we hate it because it’s, well, uncomfortable.  It’s uncomfortable to be called out, to admit we were wrong, to agree that our path was a dangerous one.  The darkness feels like a friend when it’s all you know. And so we fight against the light, both the initial beam that shoots like an arrow at our weakness and the extending rays that prompt us toward better tomorrows birthed by today’s changes.

I’m also convinced this is why some people veer away from reading God’s Word.  Because it hurts like a bright flashlight being shone in our eyes.  It’s much easier to find the ways other people are failing to walk in God’s truth than it is to see our own sin and shortcomings written on its pages.  And then sometimes we find relating to certain people uncomfortable.  Their presence reveals who we wish we were, who we know we should be, and so hanging out with them illuminates all our flaws, like glaring human vanity lights around a mirror.  It’s easy to be around folks that make us feel like it’s okay to embrace the status quo and be satisfied with a C- version of Christianity. It is much harder to be with the ones who call us to a higher standard, one that requires us to, God forbid, repent and change.

1 Peter 2:9 brings us this amazing promise:  “But you are a chosen race, a royal priesthood, a dedicated nation, [God’s] own purchased, special people, that you may set forth the wonderful deeds and display the virtues and perfections of Him Who called you out of darkness into His marvelous light” (AMP). Oh, this is good stuff!  We are special people.  We are called to do wonderful deeds. We get to display the very likeness of Christ. And we have been introduced to His marvelous light, a light so bright it sometimes hurts. But once you begin to walk in this marvelous light, the darkness loses its appeal, and you begin to find yourself liking the Sunshine just fine.  It’s easier to see where to set our feet and we are less likely to get tripped up when the Light Himself shines on our path.  What happens in the dark? That’s no longer your concern.  You’ve been introduced to His marvelous light and there’s no turning back.  So push past the initial discomfort.  It’s a whole new world on the other side.

I’m Renee. Wife of one awesome husband and mom to two beautiful daughters and one terrific son-in-law. I like antiques. Old ones with original chipping, peeling paint. I like to rearrange my house and bake things like whoopie pies. I like making lists and checking things off of them. I like pretty napkins and warm vanilla sugar body lotion. I like Hershey Almond Bars, and I think they taste best frozen. I like to read and write and imagine the day someone might actually buy what I’ve written.
← Have You Hit the Wall? Chosen and Cherished →