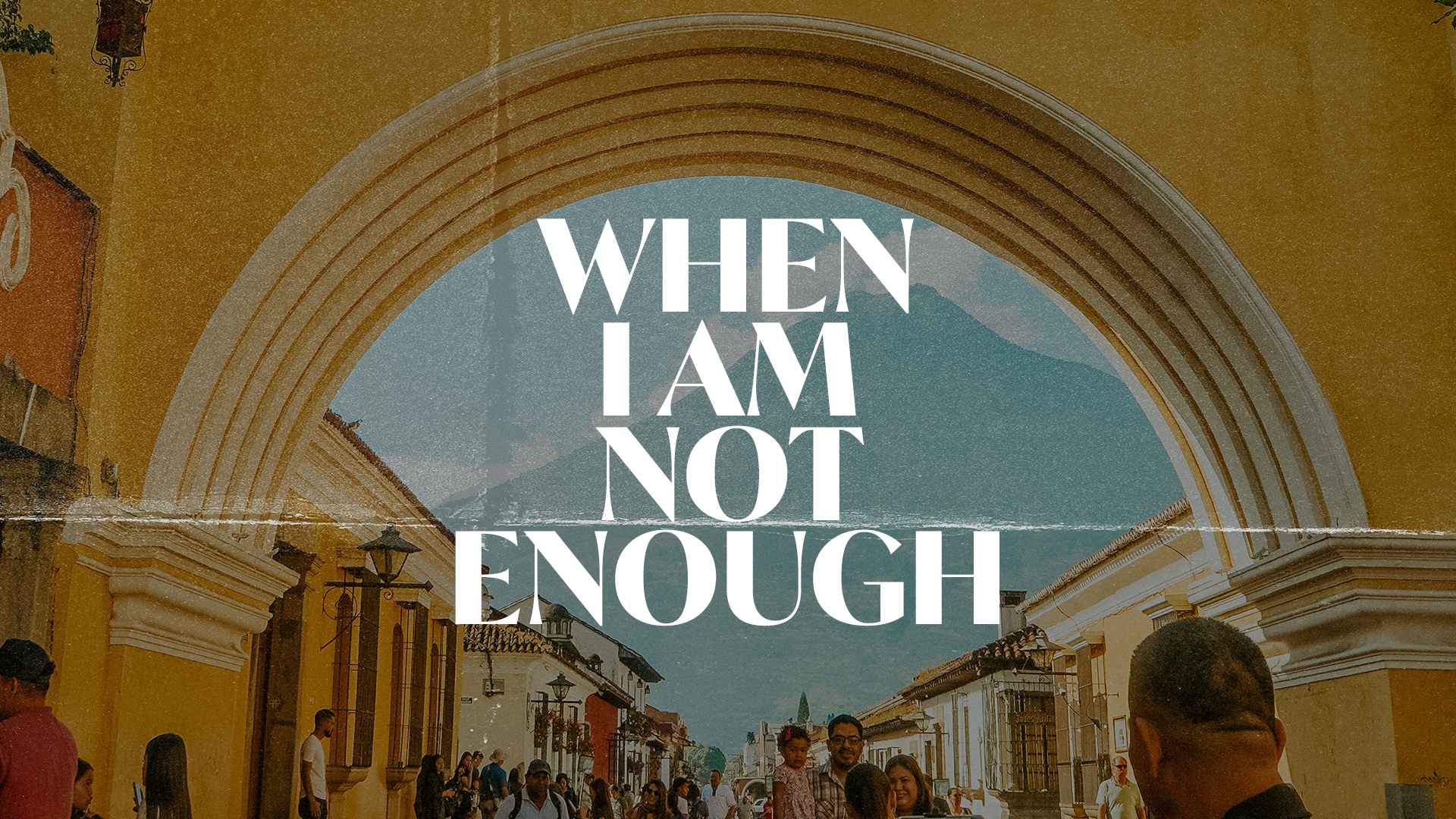 When I Am Not Enough

Many years ago, our family of four signed up for a mission trip to Guatemala.  Truth be told, I didn’t really want to go, but the rest of my family did, and I decided if any tragedy was going to befall us, we were going to die as a pack.  Morbid, I know, and certainly not very spiritual, but that was, in large part, my motivation for joining my family.  I did not want to be the last man standing.

I should have known it would stretch me.  I had never even flown on an airplane before, much less out of the country.  My own anxiety had to be relegated to the back burner so I could focus on making sure my children, also first-time flyers, were okay, but I was terrified, to say the least.  I’ve never had the wanderlust that seems to burn in others, that need to learn about and explore other places and cultures.  I’m a homebody, and home has always been my favorite place to be.  I spend most trips anticipating the joy of sleeping in my own bed.

Our team was rather large, consisting of a blend of ages and seasons of life, and while many of them were already good friends of our family, the introvert in me found myself quickly thrust into 24/7 community.  The only place to think my own thoughts or find a piece of solitude was in our bedroom.  But team is team, so I forced myself to engage and fight back the longing to withdraw.  I even played a few card games in an effort to join the fun, but games are not my thing, so this stretched me as well.  My kids were old enough to be independent, but young enough to still need some supervision, and for the life of me, I could not seem to find the right balance.  I longed to be at home with my family, all of us in the same place at the same time, rather than each of us being deployed to a different task or direction.

And the food!  I’ve never been known for bravely trying new things, and this trip was no exception.  Even though we were not served anything extremely unusual, my stomach struggled to enjoy much of anything.  I was suspicious of every meat, vegetable, or juice that made an appearance.  How I longed for the flavors that my palate found familiar, the comfort foods of my Lancaster County heritage.  I was nauseous for no logical reason at all.

The laidback pace challenged me, a very task-driven person, as well.  I imagined our days would be filled from morning till night with a hustle of activity as we served the community.  In fact, I was counting on this to help make the time go faster.  No such luck.  The days seemed to stretch out endlessly before me as we waited for instructions, waited for paint, waited for supplies, waited for transportation.  I felt guilty that people had given money to support our trip and here we were, playing games and making conversation to pass the time.  Weren’t we here to make a difference?  My mind could not seem to wrap itself around the cultural differences that confronted me at every turn.

I cried every single day.  I was miserable in all the worst kinds of ways, and I was even more miserable knowing that everyone else was having fun while I was wishing the days away.  I couldn’t imagine how the trip could ever be redeemed.

About midway through the week, I lay weeping across our bed, desperate for the Lord to show up and help me.  I could not seem to help myself.  My pep talks and prayers seemed unable to break through the cloud that enveloped my heart and my head.  I began to page aimlessly through my Bible, no real destination in mind, but knowing the answers I needed lay within its pages.  God was kind enough to randomly lead me to three different verses with a similar theme (NIV, emphasis mine):

Isaiah 63:9 | “In all their distress he too was distressed, and the angel of his presence saved them; he lifted them up and carried them all the days of old.”

Isaiah 40:11 | “He tends his flock like a shepherd: He gathers the lambs in his arms and carries them close to his heart; he gently leads those that have young.”

There I was, hundreds of miles from home, in a culture that stretched me, offered food that nauseated me, surrounded by people whose enthusiasm only seemed to highlight my lack thereof.  I was astonished and comforted by the fact that God met a crying mother in her moment of desperation to remind her that He alone would carry her.  I did not have to be amazing and strong; He would be that for me.  I decided to take Him at His Word, to stop trying to be brave, and to let Him carry me, as He had promised.

Something shifted the next day.  As we packed large sacks with supplies for the families of a local village, I found myself enjoying the project and the company of those on my team.  I could finally set my hands to a tangible task that made me feel useful and kept my mind occupied.  Instead of being petrified during our trip to the village, complete with hairpin turns on the side of a mountain without guardrails, I found myself drawn to the beautiful people we found in the valley.  We held a baptism down by the stream that flowed through their community, and flocks of people dressed in colorful, handwoven clothing gathered to watch.  The experience was surreal.  It was the first baptism ever to happen in that particular village, and I got to bear witness to it.  I remember thinking that, although our paths would likely never again cross on this earth, someday I would see these very people in heaven, and all of our differences would cease to matter.  I was awed to be allowed a glimpse of heaven on earth that day.

On the way home, we stopped at a restaurant and I found myself enjoying the food and the fellowship.  I even tried a few things that were unusual or strange, at least to me.  As we all piled into our two rickety busses to head back to the mission, my heart was at rest for the first time in days.  Maybe Guatemala wouldn’t be the death of me after all!  I was able to spend the remainder of the week allowing the Lord to carry me when I absolutely could not do so for myself.  I understood in a fresh way how He became my strength when I had none, how my weakness is the beautiful canvas upon which His glory is displayed.  That He would look with compassion on me, when I felt I had utterly failed Him, and somehow redeem the experience and restore my heart once again.  To be sure, upon our return, I was never so happy to see my own house or lay my head on my own pillow.  But I learned that God truly is able to be in more than one place at a time, and He is never disappointed when I am not enough because He is always more than I deserve.

I’m Renee. Wife of one awesome husband and mom to two beautiful daughters and one terrific son-in-law. I like antiques. Old ones with original chipping, peeling paint. I like to rearrange my house and bake things like whoopie pies. I like making lists and checking things off of them. I like pretty napkins and warm vanilla sugar body lotion. I like Hershey Almond Bars, and I think they taste best frozen. I like to read and write and imagine the day someone might actually buy what I’ve written.
← Keys for Confidence How in the World Will We Live? →