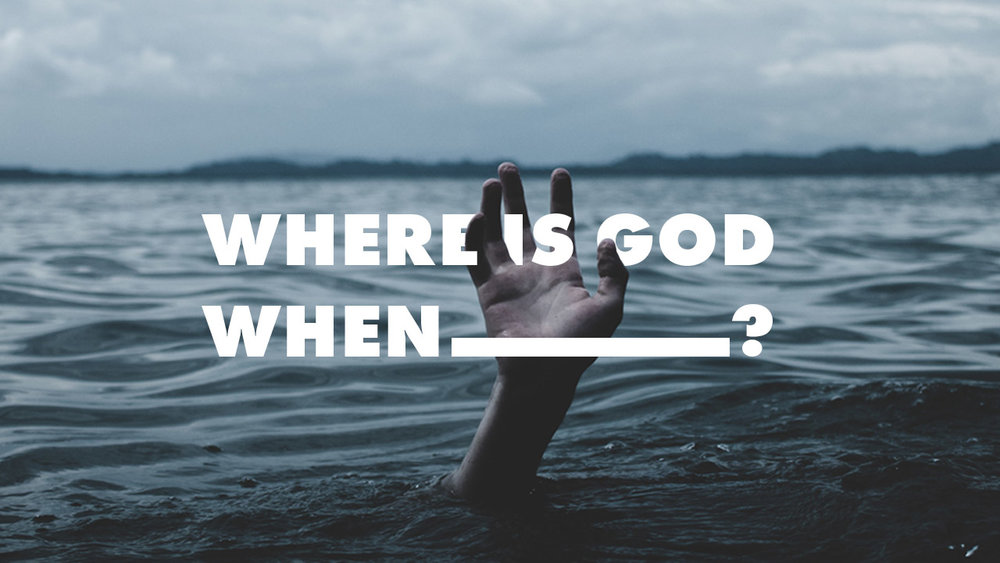 Have you ever endured circumstances that tempted you to wonder “Where is God in all of this?” I know I have. At my age, there have been many, but a few seem to stand out in my mind.

There was this time during the summer of 1962 when, as a 12-year-old boy I realized that my family as I knew it was going to be over. Mom was leaving dad. It wasn’t up for a vote. The only decision she asked me to make was whether or not I wanted to stay with dad or leave with her and my younger brother and sister. Where was God? I felt so alone.

On January 22nd of 2008, my 45-year-old sister died after a horrific battle with cancer. She left behind two teenage children and a grieving husband. As her casket was lowered into the ground, I felt a slight temptation to whisper “Where is God?”

There have been many times during my 42 years of pastoral ministry when I stepped into the darkest hours of some very precious people. I mean, when you see a beautiful 6-year-old boy lying lifeless on an emergency room gurney after succumbing to smoke inhalation in a house fire, and hear the grieving mother cry out as she stroked her son’s hair, “Where is God?” it was hard to resist the temptation to join her in that painful lament.

When Jesus became a man, he showed that God was not merely a principle but a person. Not a myth, but a man who was God at the same time. Not a figment of someone’s imagination, but a living presence. Jesus was not an idea of God, not a picture of God, but God himself in human form.

Two young men on a battlefield in World War II made it to the safety of a foxhole in the midst of enemy fire. As they looked out before them across the battlefield, they took in the horror of dead and dying men. Some men lay lifeless; others cried out for help. Finally, one of the men yelled, “Where in the hell is God?” Soon they noticed two medics, identified by the red cross on their arms and helmets, carefully making their way across the perilous scene. As they watched, the medics stopped and began to load a wounded soldier onto their stretcher. They then began to work their way to safety. As the scene unfolded before them, the other soldier now boldly answered his friend’s question with these words: “There is God!”

When Jesus came, it was his way of saying, “Here is God! Here is God!” He came in the midst of the loneliness and the horror of a world gone mad. Yet in the chaos and confusion, Jesus announced that God is here. Where in the world is God? God is here in Christ. Christ has come among us to show us who and what God is. Jesus showed us God in a way that we can understand. In a way that renews us. In a way that gives us hope. In a way that demonstrates compassion.

How can you be like the men wearing the Red Cross insignia? What compassionate and courageous act can you perform that will shout to those who are doubting, “Here is God?”

"Steve Sabol was born October 3rd, 1950 in Bristol, PA. He married Nancy Keller, the love of his life on July 12th, 1969. They celebrated their 50th wedding anniversary in 2019. They have a son and a daughter, five granddaughters, and five great-grandchildren. Steve entered full-time pastoral ministry in August of 1980. He’s been a shepherd for over forty years. He moved to Lebanon thirty years ago and today serves as one of Lifeway Church’s community pastors. Steve has been a musician for over fifty years and his favorite instrument is the guitar. Ministering to men in prisons, churches, rescue missions and community centers has been a passion of Steve’s for over 12 years. He has spoken at over thirty men’s events across the country and sends out a daily inspirational email to over 6,000 men every day. He is currently writing a book titled “Connected” which should be available in the summer of 2020. Steve loves spending time with his bride, and staying busy for the King, changing the world one man at a time."
← This Is A Test The Bitter Root →