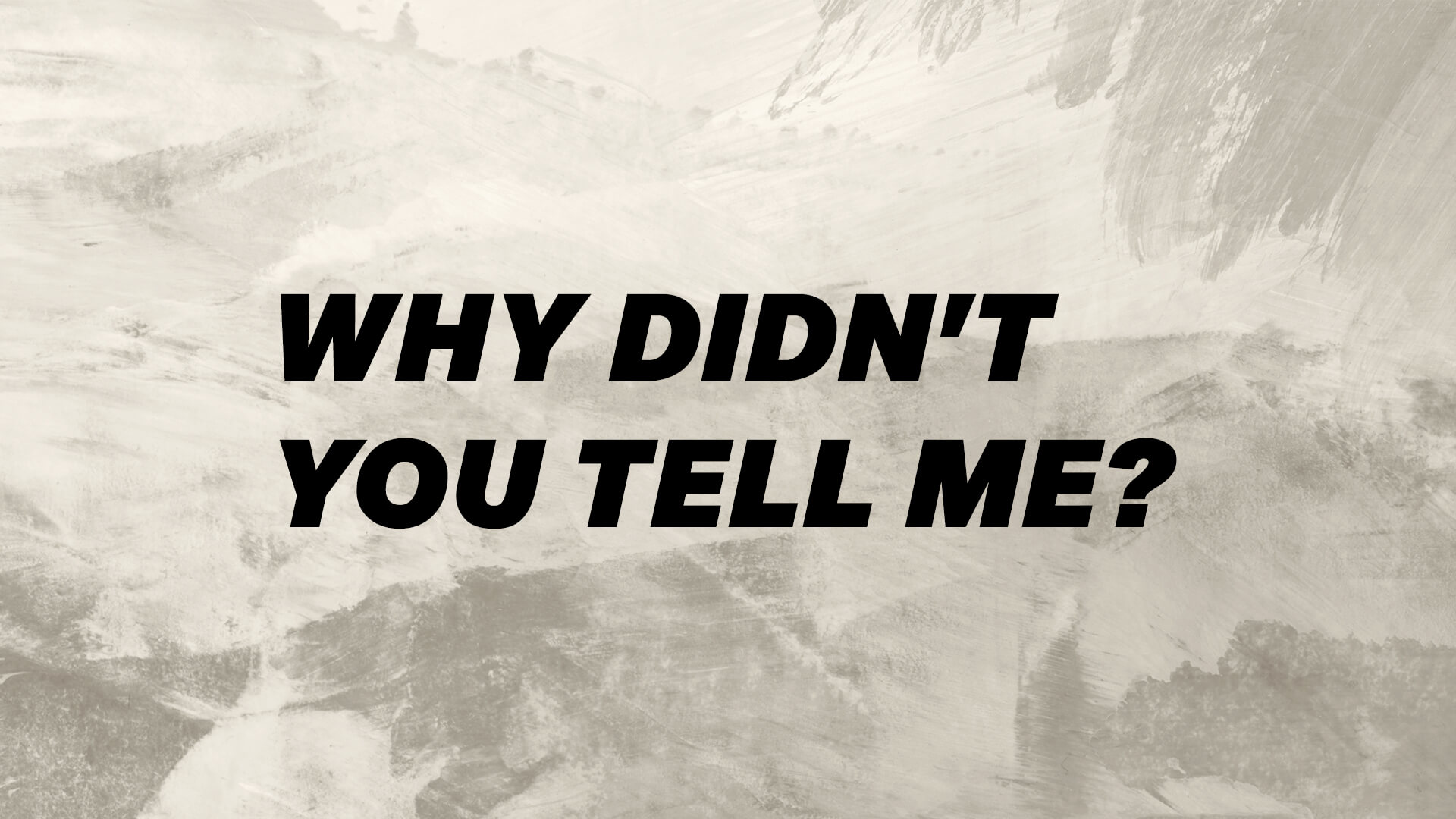 Why Didn’t You Tell Me?

Patty was one of my best friends. Patty’s dad was the superintendent of the school in Scobey, Montana. I can’t remember how many brothers and sisters she had, but each of them had a bicycle, and there was always a bicycle for me to ride. We had an old bike at home but riding alone on the gravel roads on our farm wasn’t much fun. I didn’t think there was anything more fun than riding bicycles with my friend on the paved streets in town.

I was 10 years old. The earth finally started waking up after the long winter. School was out. It was still chilly, and because of the late Montana spring, the swimming pool wouldn’t be open for several more weeks.

Mom was going to town to write some articles at the newspaper office, and I took every opportunity to go with her to be with friends.

Patty invited me over to ride bikes.

“Mom, may Kathy and I ride out to the golf course?” she asked her mother.

“I suppose,” she responded. “Just be careful.”

And with that, we were off. As we came to the edge of town the pavement gave way to the gravel road by the newly created “antique town” where old buildings, machinery, and artifacts were being gathered to create a museum that would become our town’s main attraction.

As we rode toward that golf course, it was obvious that there had been no road maintenance over the winter.

We raced each other past the old buildings, and as we did, several girls from my older brother’s class were riding their bicycles back to town. As we raced past them, they warned, “SLOW DOWN”.

I yelled back at Patty as we crested a steep hill, “What did they say?”

She yelled back as I sped down the hill, “I think they said, slow down.”

But it was too late.  I was going fast, and the front tire got caught in a deep rut carved from the spring run-off of melting snow. The tire started bouncing back and forth in the rut, and my bicycle went out of control. I flew off the bike, my body rolling uncontrollably like a ragdoll thrown from a car until I finally came to a stop.

Patty screamed, “Are you okay?” Leaving her bike at the top of the hill, she ran to help me. I hurt all over and it felt like I had broken bones everywhere. I could stand but could hardly walk. She left me there and sped home on her bike to get her dad. Although I was sore, bruised, and embarrassed, I had only broken my collar bone.

The warning was shouted, but I didn’t hear it. I wasn’t listening.

I’m not always good at confrontation face-to-face. I’m a writer, and unlike the spoken word, in writing I can edit, re-write, and evaluate before it’s put out there.

I recently came across a letter that I had written several years ago when a young friend was heading down a dangerous path.

As I re-read the letter, I felt the Lord remind me that the Word of God is not only filled with promises and inspiration to live godly lives but it’s also filled with warnings.

We know that the Bible warns us in Leviticus 19:31 (NIV), “Do not turn to mediums or seek out spiritists, for you will be defiled by them.” It seems harmless, some of our favorite TV shows had mediums or happy witches as the main character.

And what about the friendships on our shows; sexual immorality is so commonplace in movies and on TV that this generation thinks it’s normal to live together before marriage.

Who is going to warn this generation? Is this just old-fashioned?

I remember getting in the car with my fiancé. We were driving back to Bible School in Texas. Even today I have a difficult time speaking about “sexual” anything because it was such a private subject, but my dad was concerned, and even back then, warned us to “behave”. As we drove off, I looked at my fiancé and asked, “Do you think he meant . . . ummm…” and he laughed and said, “I don’t think your dad is as naïve as you think he is.”

“Or do you not know that your body is a temple of the Holy Spirit within you, whom you have from God? You are not your own, for you were bought with a price. So glorify God in your body.” 1 Corinthians 6:19-20 (NIV)

It’s okay to speak up. What if you’re visiting a friend, and the decorative candle they lit to impress you was too close to a sheer curtain? Would you say something? How about if the curtain starts on fire? Can we develop the same urgency for our children’s souls?

Lord, thank you for truth. I pray that those that are within our sphere of influence, whether family, friends, or casual interactions would be confronted with truth and feel your presence because we bring your presence wherever we go. In our broken world, many have no clue that they are agreeing with the works of the enemy. Use me to bring light to everyone I encounter. In Jesus Name, Amen.

Kathy Rice has lived in Pennsylvania since marrying her husband in 1977. She was born and raised in Montana, and attended Montana State University and YWAM’s School of Evangelism in Bozeman. She met her husband on a wagon train that went across the United States in 1976 during the bicentennial with Youth With A Mission. She attended Christ for the Nations in Dallas, Texas, and worked in Haiti among the impoverished nationals where her first child was born. Her six grown children currently live in central Pennsylvania, and she enjoys time with her thirteen grandchildren. Kathy has authored a book, Kathy Run, telling of her young life on a farm in northeast Montana while attending a one-room school. She is currently a Realtor® with Re/Max of Lebanon County. Many of her inspirational pieces are drawn from her experiences on the farm, on the mission field, and raising her family next to her husband, Donnie Rice.
← There Is Power In Your Story No Greater Love →